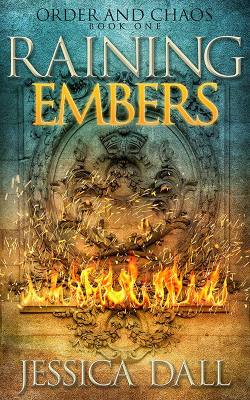 Palmer Tash always follows the path of least resistance. He has an unusual disability involving his hearing. But in theocratic Latysia, being different isn’t a good thing, so he conceals his problem.

Brier Chastain’s malady is even more debilitating, and she often must take to her bed for long periods. Her days are spent in meaningless pursuits as she awaits an arranged marriage.

When Palmer and Brier are kidnapped on the same night, they meet and discover that their so-called disabilities are actually budding powers. They are the incarnations of Order and Chaos. With their country on the brink of war, the two must step into their predestined roles and learn to take control of their own destinies.

What Critics are saying:

“A journey of growth and bravery that is sure to have you on the edge of your seat.” – Echo Rains Reviews
“Probably one of the best books I’ve read in awhile.” – Heather Eager, Wonder of Words
“…a fun and fully engaging fantasy novel, filled with romance, adventure, and spunky, lovable characters.” – L.C. Woodbury Reading&Writing
“…pulls you in like you’re watching a movie, or rather, living one.” –Love Letters Lost
“simple and captivating” – Enthralling Dimple Reviews
“…rich with intrigue, a variety of characters, a little romance and the dialogue of two young people who are bound to carve out a place together in a strange new world.” – Tome Tender Reviews