As we turn into the third week on NaNoWriMo an interesting question has popped up in one of the forums about dialogue tags. Now, I have previously touched on the subject of why it is not a problem to use “he said” and “she said” rather than trying to find random replacement words. This question, however, asked:

I’m wondering if there is any difference between using ‘she said’ and ‘said she’. I feel like I tend to use ‘she said’, but both sound grammatically correct to me…

First things first, grammatically, yes,both are correct. The reason this forum poster might find they are using “she said” more than “said she”, however, is that “said she” has slowly fallen out of favor in the past 150 years or so: 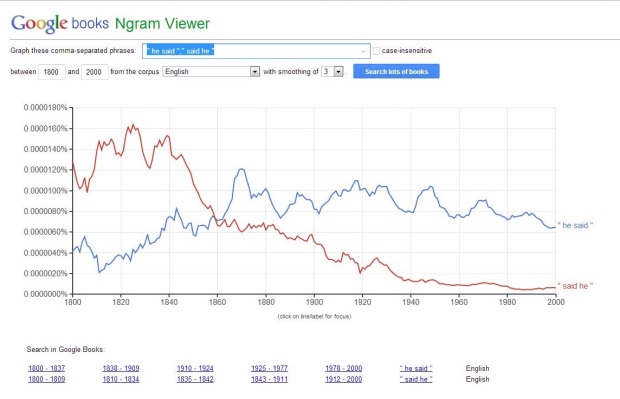 Going above and beyond for this OP, WriMo doublej compiled this handy graph of the use of he said and said he over the past two centuries. As can be easily seen, “said he” was the more popular form of dialogue tag in the beginning of the 19th century before it started to lose quite handedly to “he said” sometime around the American Civil War. And so, while it is not grammatically incorrect to use “said he” in your writing, it does give a distinctly “old” feel to the prose.

If this is a conscious decision in your writing, go for it. Otherwise, it might be wiser to just stick to the more popular “he said”–especially if that is your first instinct. It doesn’t feel as old, and certain publishers will be less likely to find your writing “antiquated” (seriously, I’ve done editing work for a publisher who’s house guide included replacing any “said he”s with “he said”s in editing to keep the books from sounding, in the words of the editor-in-chief, antiquated).

And so, with that taken care of, get back to writing. November’s not over yet!