With November slowly creeping up–and thus the start of National Novel Writing Month almost upon us–I am getting more and more questions about how to start novels. I have previously touched on what is my standard advice is for rough drafts (namely, find the inciting incident and start somewhere near there. Worry about the exact opening in edits) but for those who still are looking for pointers, here are a few things to keep in mind:

Do: Try to start close to the inciting incident or, to put it another way, “on the day everything changes.” While several scenes of your character going about their life might be helpful for you as a writer, following a character wandering around with no sign of a plot starting isn’t very exciting for the reader.

Don’t: Start a scene and then fall into an info dump. Just as bad as starting too early is coming in close to the inciting incident and then spending pages 2 through 5 telling the reader everything that’s happened in your character’s life leading up to that point (or even just what’s happened the past few days that aren’t “the day everything changes”). Try to draw readers in with something happening in the present before stopping the plot to tell them a bunch of information about characters they don’t yet have any reason to care about.

Do: Start with action. Do your best to find something happening that will interest your reader immediately. This might be dropping into a conversation, your character taking a test that will make or break their schooling, or the beginning of a car crash. If it’s some sort of action that the reader can immediately connect to, you’re in good shape.

Don’t: Begin with your character waking up (or perhaps being chased). Connected to above, while it’s tempting as a natural start point, your character waking up is not a great start to a story–mostly because (unless your character is waking up to someone attacking them or something similar) there isn’t much to draw the reader in. Everyone wakes up in the morning (at least everyone in your reading audience likely does). A character waking up and getting ready for the day is generally mundane. On the opposite side, the first instinct many writers have when they hear “start with action” is to start with the main character being chased by something. Those openings can work if done well, but they can also easily feel overdone as they are so commonly used.

Do: Remember everything can be changed in editing. If you start too early or too late, if you start writing and then realize that that opening scene is rather, well, boring, you can always change it after the fact. For my novel, Raining Embers, coming out in November, I changed the opening twice myself and another time with my editor. Starting in general is more important than starting perfectly. After all, you can’t edit a blank page. 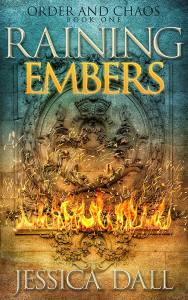