There are plenty of reasons to pick a specific Point of View (POV) when writing a story. How close (or distant) you want the reader to be to the characters, how many plot lines there are going to be… there are quite a few things to consider when deciding if a story should be written in first, third, or–rarely used–second person.

It is not exactly a closely guarded secret that I strongly prefer third person–not least of all because I often have stories that are best suited with multiple POV characters. While it is possible to have multiple first person narrators, third makes switching off between people much simpler.

Of course, that isn’t always a good thing. A couple of years ago I touched on the issue of head jumping, which comes from poorly controlled POV in third limited (where a single scene slips between a number of characters’ POVs), but even with head jumping taken care of, some stories can still suffer from POV bloat–or simply more POV characters than the story can easily handle.

Now, there are some stories that need a large case with a lot of POV characters–especially epics with several plot lines happening in several different places. As with any other writing advice, “try to stay away from several POV characters” is not meant to be cardinal law. Once you start creeping above four or five POV characters in one novel, though, it is generally a good idea to step back and make sure that all of the POV switches are necessary.

Why? Because POV Bloat starts to have many of the same problems as head jumping–the narrative can become disjointed, and it can become more difficult for the readers to connect to each character. After all, as more POV characters there are, the more heads the reader has to acclimate to. Fewer heads allow for more depth, which in turn allows for the reader to become more deeply connected to the characters telling the story.

So, what should you do when you think you might be suffering from POV Bloat?

1. Make sure all your POV Characters are necessary.

As stated before, sometimes 5, 10, 15 POV characters are necessary for the story you are trying to tell. Often times, though, they aren’t. It is not necessary to get every side of a story to have a story make sense. Pick out the most important characters you have for each plot line and then determine if you can tell the story using just those people. Limiting yourself can sometimes actually make the story stronger since it means you will have to show things that imply how other characters are feeling/have your POV characters interpret other characters’ actions rather than jumping around to tell the reader everything that’s going on/relying on internal monologue.

Short scenes are sometimes work well. When switching POV characters, too many short scenes can feel like head jumping the author is trying to get away with. This is especially true if there is one overall “scene” happening (one event happening in your story) and the reader is being jerked back and forth to both sides every few paragraphs (Character A is doing this. Character B is doing this. Now Character A is…) The jumpiness might work in visual media (where the camera is covering everything that is happening) but since third limited relies on placing the reader in a character’s head, it actually damages the flow of action to continuously pull them out and force them back in on either side.

As always, do what is right for your story, but also remember sometimes less really is more. 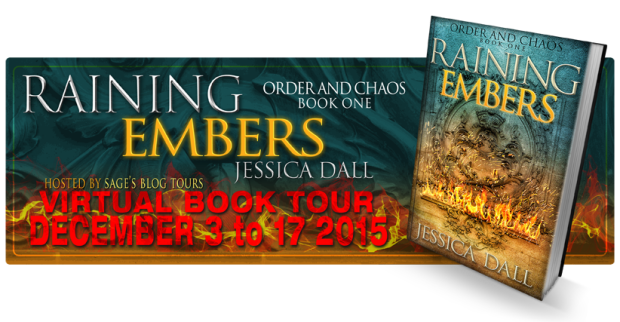 News Alert: the release of Raining Embers is now less than a month away–which means pre-marketing is in full swing. If you host a book review or writing blog, consider signing up for the Raining Embers Virtual Book Tour here: http://www.sagesblogtours.com/raining-embers.html