One of the first pieces of writing advice almost all new writers hear is the old adage “Show don’t tell.” Back when I first started writing, I fully loathed hearing people say that–mostly because I don’t think anyone ever explained it very well beyond “don’t use to be verbs.” While trying to stay away from weak verbs is generally good advice, even brand new writers tend to realize going on a “to be” witch hunt get you awkward prose (at least I did when I had an English teacher tell us to write a story without a single was or were). 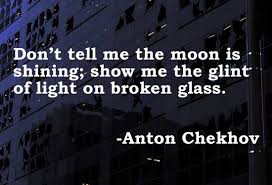 More than being about to be verbs, though, showing and not telling has to do with “showing” the reader actions and emotions rather than “telling” them what your character is like or is feeling. For example, you could tell a reader, “She was a quiet girl and wanted to be left alone” or you could show a little girl sitting at the back of a classroom, her shoulders pulled up to her ears as she prays in her head that no one comes to talk to her. While both make the same general point, the second paints a much more vivid picture and pulls the reader into the scene rather than just giving them statements to remember.

While it’s good to stay away from weak/telling phrases in general (I was; I felt; I wanted; I liked…) showing becomes immeasurably important when it comes to fleshing out characters. It doesn’t matter how many times you tell your readers that your character is quiet and shy, if all you show is your character being the center of attention at party after party, your character is going to read as someone loud and outgoing. When it comes to characterization, actions truly do speak louder than words.

So, instead of telling your reader character traits:

1. Look for scenes that show important traits. For example, rather than telling the reader that your character is a good fighter (or having people talk about how good a fighter that character is–as seems common in TV shows) look for a scene where your character will be able to show off those skills.

2. Shape dialogue to show personality. No two people speak entirely alike. Some people share certain verbal tics, but personality shapes word choice, slang usage, wordiness, and all those other things that make a character sound like a person rather than the author. If your character is shy and quiet, their dialogue will likely be shorter and meeker than a character who loves attention and so pontificates whenever given the chance.

3. Make a point when your character is acting out of character. Sometimes, you’ll need your “stickler for the rules” character to go against type and break into work to steal a file. That’s fine, as long as you show that that’s not who your character normally is. Make a point that your character is nervous/uncomfortable with what’s happening or take the time for them to struggle with making the decision to act against who they are (ideally after you’ve already shown who the character normally is earlier on). By showing what is happening is the exception to the rule will help keep the reader from seeing a strange disconnect between what they’ve heard about the character and what they’ve seen.

Just remember, when it comes to learning about characters, seeing how they act is much more powerful than hearing once or twice or ten times that the character is X. Use showing to your advantage, even if you still need some was and weres in there.