July 10, 2016July 10, 2016
Kicking off the “Genres (and why we write them)” series of guest blogs is Victor Catano, author of Tail & Trouble, who is stopping by on his blog tour. Connect with Victor on Twitter or Facebook or on his own website: http://victorcatanoauthor.weebly.com 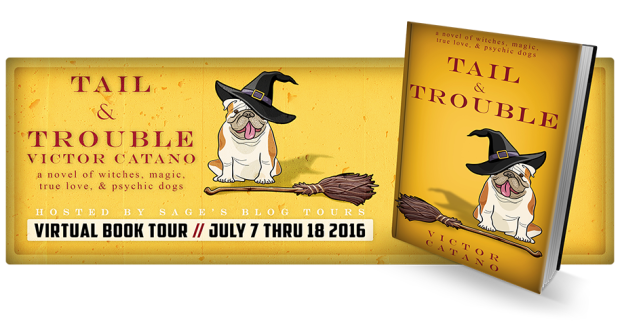 Recently, I had my first novel published. Tail & Trouble came out on May 10th, and I was very excited. It’s a story about a guy named Gabriel trying to find his missing girlfriend Sheila, who is a witch. Her coven won’t help him, so he sets out on his own. His only help is Orson, her familiar who is a bulldog and magically linked to both of them. Orson can communicate with both of them. I think it’s a lot of fun, and the reviewers think so too.
Ah, reviewers. Since I am with an independent publisher and they don’t have the ad budget for a big promotional blitz, I have been submitting to various book blogs to get reviews. One of the first ones I got was very positive and mentioned that I “brave a predominantly female genre to give us a fresh perspective on witch fantasy!”
Which gave me pause. (Paws? Ok, enough dog puns.)  I really didn’t think of myself as particularly “brave” for writing a story about a magic dog. Usually I felt over-caffeinated. (I write a lot at coffee shops.)
The genre I am writing in is urban fantasy. Like a lot of genres, it is full of sub-genres, sub-sections, and so on. I take it to mean that the story is in a modern (ish) setting, but there is a magic element to it. That is incredibly broad, I know. (Technically, that means that Harry Potter is an urban fantasy. So is Sookie Stackhouse. So is Harry Dresden.) But what I enjoy about that is that a lot of the work of world building has been done. If a story is in a modern setting, I don’t have to explain how the world works. I don’t have to explain a car, for example, the way a high fantasy author would have to explain why people get around on giant flying hamsters. This lets me focus on the specific magical elements of my story. (Like a telepathic bulldog who hangs out with witches.) That’s fun for me, because I’m more interested in the characters and how they interact than in describing all the surroundings.
The thing about fantasy writing is that I didn’t think there would be any expectations, except to write a compelling story, of course. It certainly didn’t occur to me that I was entering a female driven field. (My book cover has kind of a cozy feel to it, which might be a part of it.) I’ve certainly found that more women are reviewing it on blogs and on Amazon than men, but I think there are more female book bloggers and reviewers in general.
Since I started writing this mainly for myself and just for fun, I really didn’t put any expectations on the book – especially with publishing. Then when I showed some chapters to my wife, and then my mom, and then she gave it to her friends, and then they started to demand more and more chapters, that’s when I started to work harder to finish the book. And then when all of those people enjoyed it, that’s when I started to submit to publishers.
Since I read almost nothing but genre fiction (mystery, crime, fantasy, and SF) I didn’t think my genre would hold me back. I was more worried about finding a publisher to submit it to. Most publishers don’t want to deal with you unless you have an agent, most agents don’t want to deal with you unless you have a published work. (There really ought to be a phrase that describes that…Conundrum 23? I’ll work on it.) Thankfully, I found Red Adept. They accept unagented submissions and they accepted my book.
It’s a lot of fun to write in the urban fantasy genre. I’m writing the second book in the series now and I hope to continue for a long time.
Thanks for hosting me, Jessica!
——————————————-

Tail and Trouble by Victor Catano

When Gabriel’s witch girlfriend doesn’t return from her latest trip, he gets on the road and heads out to find her. Sheila’s coven is secretive and distrustful of Gabriel, so the only help he has is Sheila’s familiar, a bulldog named Orson, who is psychically linked to both of them.
In Florida, they walk right into an elaborate plan to steal Orson. A mysterious wizard named Yareth is behind the plot, and he may also know where Sheila is. Gabriel and Orson will have to fight for their lives as they navigate around all the magical roadblocks to force Yareth’s hand. They won’t give up until Sheila is safe.

Victor Catano lives in New York City with his wonderful wife, Kim. When not writing, he  works in live theater as a stage manager, light designer, and technical director, working mainly with dance companies. His hobbies include coffee, Broadway musicals, and complaining about the NY Mets and Philadelphia Eagles.

One thought on “Genres (and why we write them) #2: Victor Catano”